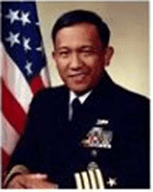 Dr. Tem E. Bugarin was born in Bay-Bay Leyte, Philippine Islands in 1946 and raised in Stockton, California. He graduated from Franklin Senior High School in 1964 and attended San Joaquin Delta Junior College where he earned an Associate Degree. Following San Joaquin Delta, Captain Bugarin attended Fresno State College. In 1969 he completed all requirements for a Bachelor of Science Degree and was commissioned an Ensign through the Navy’s (ROC) Reserve Officer Candidate Program. In 1989 Dr. Bugarin was promoted to Captain, United States Navy. In 2001, he earned his Doctorate Degree in Business Administration with an emphasis in Strategic Management. Dr. Bugarin transitioned from the U.S. Navy after thirty years and worked as a Government Scientist for SPAWAR Systems Command San Diego, Senior Program Manager for AT&T and VPSI, and Quality Assurance Inspector for the Installation group SPAWAR. In academia, Dr. Bugarin has been teaching for the University of Phoenix and other schools for 20 years. In addition to his master’s degree in Operations Research/Systems Analysis, Dr. Bugarin holds a master’s degree in Business and Public Administration, a Master of Arts Degree in International Relations, and a Doctorate in Business Administration from United States International University, San Diego, CA. His major areas of academic concentration and teaching assignments include Strategic Management, Quantitative Analysis (Probability and Statistics), Organizational Behavior, and Leadership. He serves as the Director and Committee Chair for several DBA candidates pursuing their Doctoral Degrees. Captain Bugarin’s major achievement while in the Navy was that he was selected to be the first Naval Officer born in the Philippine Islands to command a War Ship the USS Saginaw LST 1188. Captain Bugarin’s other achievement include:

a. Combat Action Medal and Navy Commendation Award achieved in Vietnam where he participated in on-ground reconnaissance patrols and interdiction of small North Vietnamese patrols in waters too shallow for regular naval assets to penetrate. He considers his greatest achievement was to survive the year-long tour of duty.

b. At sea tour of duties followed which included Communications Officer of the USS Gridley, Chief Engineer of the USS Lynde McCormick and USS Saipan, and Executive Officer of the USS Racine LST 1191. His first command the USS Saginaw LST 1188 occurred in 1986. His second and considered the pinnacle of a Naval Career is his deep-draft command – the USS Juneau LPD10. For his distinguished service and superb war-fighting capability, Tem was awarded the Distinguished Legion of Merit.

1. First, JCS, Studies Analysis & War-Gaming Agency, Pentagon. His achievement in that capacity was that he was one of the briefers in briefing President Reagan’s cabinet members, the Presidents of the Army, Air Force, and Naval War Colleges of the results of a major simulated War-Game between the major powers and the United States. The results of the tour of duty formed the beginnings of what is now known as the Federal Emergency Management Agency (FEMA). For his distinguished service, Captain Bugarin was awarded the Defense Superior Meritorious Medal for distinguished service.

2. Second, Afloat Training Group Western Pacific. In this capacity, Captain Bugarin was responsible for running an afloat training group effort (training onboard ships) and subsequently certifying their ability to safely operate their ships. He was also responsible for building and subsequently running an in-shore training university in Yokosuka, Japan responsible for training all Naval and Marine personal west of the Hawaiian Islands including Guan, Philippine Islands, Japan, Australia, South Korea, and units permanently station in the Persian Gulf. For his effort, he was awarded the Meritorious Service Medal for Distinguished Service.

3. Third. For Tem Bugarin’s final ashore billet, he was given charge of command of the Board of Inspection and Surveys Western Pacific where he was essentially the IG inspector of all naval vessels west of the Mississippi and as far west as the Persian Gulf. This was an awesome responsibility since the result of Tem’s and his group’s assessment normally determined whether the command’s organizational head (Captain) was allowed to retain their command. After the Navy, Tem worked on and earned his Doctoral Degree in 2000 from the United States International University now known as Alliant International University. After his degree, Tem became the Director of the Doctoral Graduate Studies at California International Business University, the Lead Faculty and Area Content Chair for the University of Phoenix, and Scientist / Program Manager for the Naval Space and Warfare Division Department of Defense. Dr. Bugarin’s achievement in his second life cycle includes the following:

1. California International Business University – Director of Graduate Studies. In this effort, he chaired and mentored 32 doctoral candidates in their efforts towards achieving their doctoral degrees. In this capacity, 28 doctoral candidates were successful so far. Assisting these students towards their degree objects were significant notable achievements. Dr. Bugarin assisted in changing the lives for the better of 28 doctoral students.

This website uses cookies to improve your experience while you navigate through the website. Out of these cookies, the cookies that are categorized as necessary are stored on your browser as they are essential for the working of basic functionalities of the website. We also use third-party cookies that help us analyze and understand how you use this website. These cookies will be stored in your browser only with your consent. You also have the option to opt-out of these cookies. But opting out of some of these cookies may have an effect on your browsing experience.
Necessary Always Enabled
Necessary cookies are absolutely essential for the website to function properly. This category only includes cookies that ensures basic functionalities and security features of the website. These cookies do not store any personal information.
Non-necessary
Any cookies that may not be particularly necessary for the website to function and is used specifically to collect user personal data via analytics, ads, other embedded contents are termed as non-necessary cookies. It is mandatory to procure user consent prior to running these cookies on your website.
SAVE & ACCEPT

The Trump administration abandons a plan to strip visas from international students taking only virtual courses.

From the New York Times.

For your information while we await official word from SEVP.

The Trump administration has walked back a policy that would have stripped international college students of their U.S. visas if their coursework was entirely online, ending a proposed plan that had thrown the higher education world into turmoil.

The policy, announced on July 6, prompted an immediate lawsuit from Harvard University and the Massachusetts Institute of Technology, and on Tuesday, the government and the universities reached a resolution, according to the judge overseeing the case.

The agreement reinstates a policy implemented in March amid the pandemic that gave international students flexibility to take all their classes online and remain legally in the country with student visas.

“Both the policy directive and the frequently asked questions would not be enforced anyplace” under the resolution, Judge Allison Burroughs said, adding that the agreement applied nationwide.

The initial guidance, issued by Immigration and Customs Enforcement, would have required foreign students to take at least one in-person class or leave the country. Students who returned to their home countries when schools closed in March would not have been allowed back into the United States if their fall classes were solely online.

The higher education world was thrown into disarray, with most colleges already well into planning for the return to campus in the fall. Two days after it was announced, Harvard and M.I.T. filed the first of several lawsuits seeking to stop it.

The attorneys general of at least 18 states, including Massachusetts and California, also sued, charging that the policy was reckless, cruel and senseless. Scores of universities threw their support behind the litigation, along with organizations representing international students.

On Tuesday, more than a dozen technology companies, including Google, Facebook and Twitter, also came out in support of the Harvard and M.I.T. lawsuit, arguing the policy would harm their businesses.